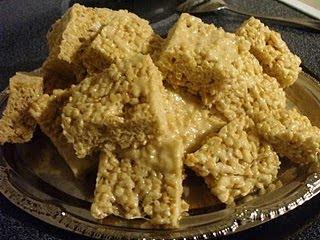 I was really dying for some Rice Krispy treats this week. 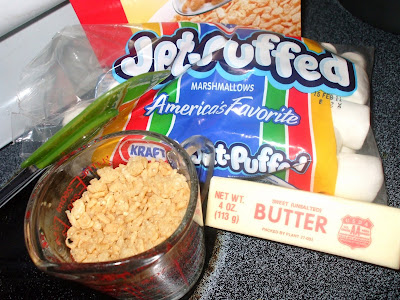 And they're so easy to make.

You just melt butter and marshmallows together in a pot, mix in the cereal, press it into a pan, and voila! Krispy Treats. 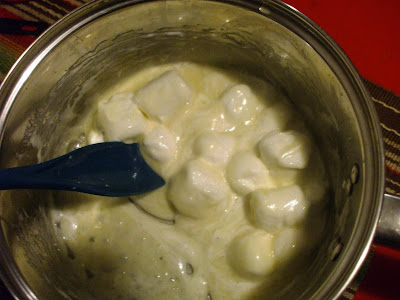 If you wanted to, you could even make them in the microwave...but that's not as cool.

This time around I made brown butter treats with sea salt mixed in. I found the recipe on SmittenKitchen and thought I should give it a try.


To be honest, they didn't taste that differently from your traditional treats. I added extra marshmallows to make them gooeier, and I thought that was the better addition than the brown butter and sea salt.


I also added melted milk and white chocolate drizzle on top of some. Yea. Those were my favorites. :) 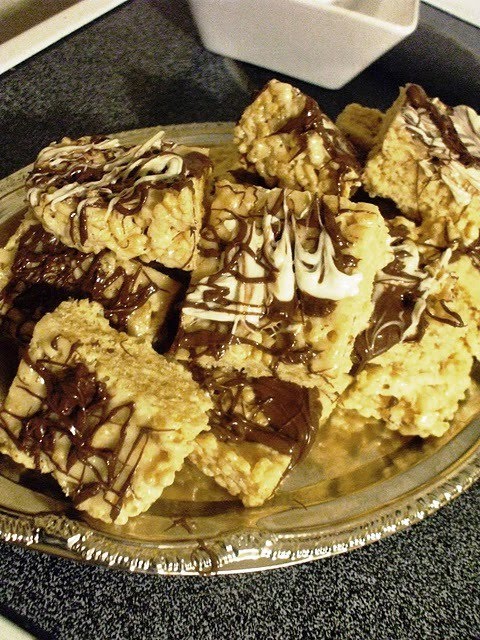 I could honestly eat the whole pan. But since that wouldn't be wise, I'm taking most of them to work for my colleagues.

Let other people get fatter. 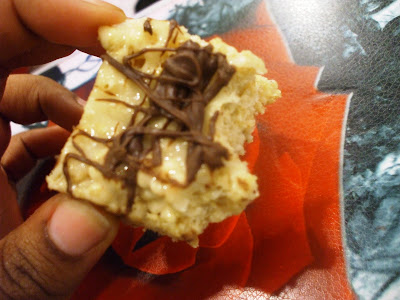 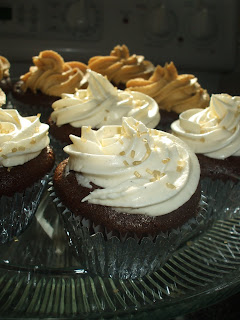 This past Sunday I made cupcakes for no particular reason.

I just wanted them.

I made flourless chocolate cupcakes. 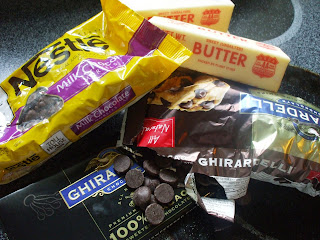 Super duper rich, smooth, and intense cupcakes they were. 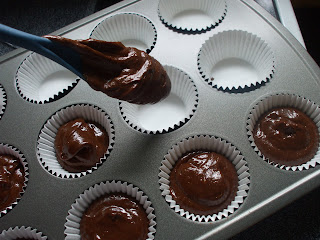 I made 3 different types of frosting to go with them as well. 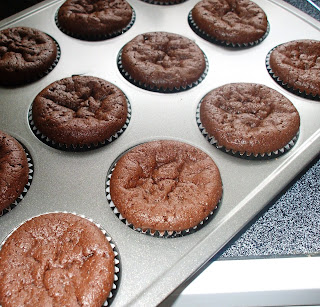 I stuck the chocolate frosting in the fridge for too long and it went bad.

It got all hard and junk. 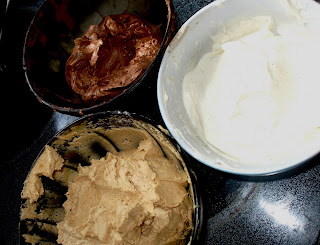 I don’t know why I forgot it in there.

So, I only frosted with the other two . 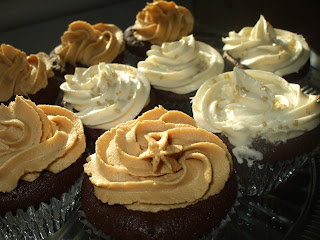 I ate one cupcake. Then another. And then one more…on Sunday.

You figure it out.

They got even better as the days went by…well, the 2 days. 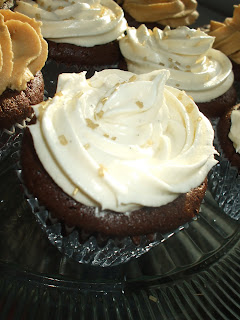 You should make these if you want to impress someone.

I then went back into my bed and watched a marathon of “Snapped” on Oxygen.

It was a gluttonous and sloth filled day. 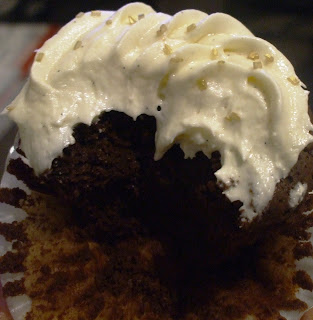 I judged myself a little.

But then I had another cupcake and felt a lot better. 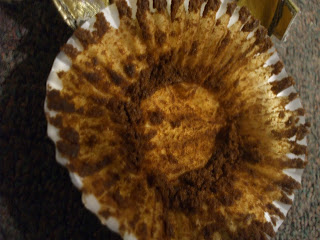 Preheat the oven to 375˚F. Place 12 paper baking cups in a muffin pan. Put the chocolate and butter in a double boiler, or medium bowl over a pan of simmering water, and stir until completely melted. Set aside to cool. In large bowl, cream the eggs and sugar with an electric mixer until pale and thick. Gently fold in the melted chocolate and remaining ingredients.

Spoon the batter into the cups. Bake for 20 minutes. Remove pan from the oven and cool for 5 minutes. Then remove the cupcakes and cool on a rack.

Slit your vanilla bean in half and use the tip of your knife to scrape the vanilla bean paste from each side of the pod.

Whip cream cheese in a mixing bowl until smooth.

Add butter and beat to combine.

Beat in powdered sugar a little at a time until frosting is as thick and sweet as you’d like.

**The chocolate fudge frosting was a fail.
Posted by Jihane @ Sinful Sundays at 7:17 PM 5 comments: Links to this post 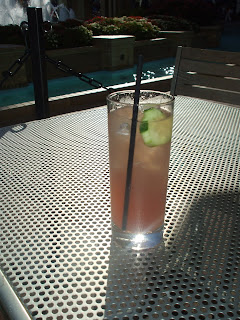 I really need to stop eating out so much but I can’t help myself! The food, the social aspect, trying new things; I love it all!

I picked 3 places that I visited in the past week in DC to highlight. If you’re ever in the area, maybe you can stop by and chow down.

The first place on my list is Marvin DC . Located on 14th Street, Marvin’s is a Belgian bistro that is inspired by soul singer Marvin Gaye.

The food is a mix of soul food and Belgian cuisine which makes it really interesting, and really good!

I first went to Marvin’s, not to eat, but to party. At night there is an upstairs roof deck that turns into a club/lounge. Between drinks and dancing to "Pretty Boy Swag", I found the menu and decided I should brunch there sometime.

Last Sunday my friend Connie was in town so we decided to hit it up. There were four of us eating that day so 2 of us ordered Shrimp and Cheese Grits, and the other 2 ordered the Belgian Waffles with whipped cream.

The Shrimp and Cheese grits were so good! I have had this dish at so many other restaurants, and Marvin’s recipe wins, hands down. The grits were incredibly smooth and not gritty at all, and the cheese flavor was so incredibly sharp that you know they used the “good stuff”. 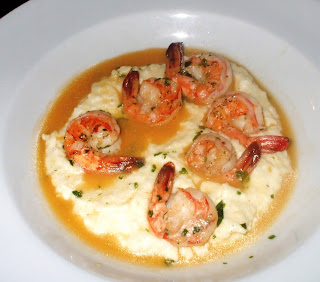 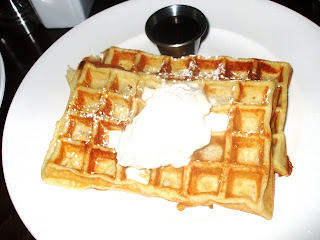 The next place on my list is Firefly which is located in DC’s Dupont Circle. It’s contemporary American food that uses locally grown products to make its food. 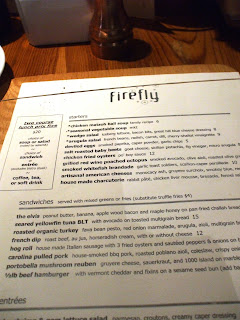 My boss took me out for lunch this past week and she suggested that we go here since she’s heard good things about it. She ordered the Cobb Salad, I ordered the Steak Salad, and my colleague got the Roast Beef au Jus.

The food there was, EH.

You’d think that something as exciting as steak on a salad with figs, caramelized onions, and pumpkin seed vinaigrette would be tasty, but it wasn’t. I had to ask the server to bring me blue cheese crumbles to jazz that baby up. After I added the crumbles, it was good. I guess… 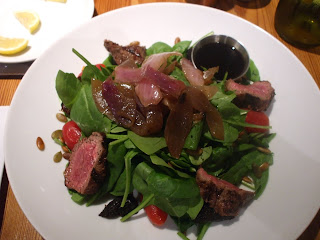 The Cobb salad wasn’t all that great either. My colleague who ordered the sandwich said his was pretty tasty, but I don’t believe him. 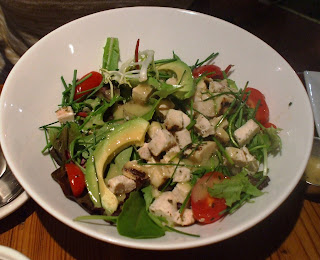 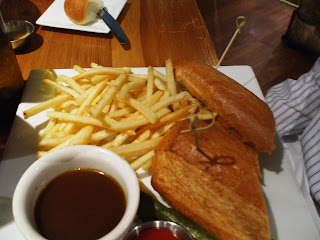 While the meals were super blah, the desserts were very good! 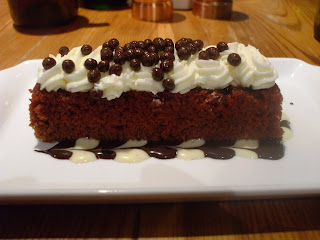 I got the red velvet cake while my boss ordered a peanut butter chocolate ice-cream sandwich. We each had half of each others desserts and thought they were both delicious. 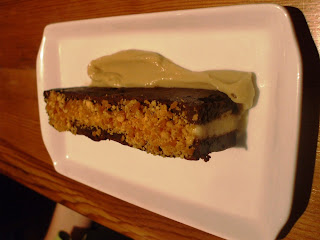 All in all, Firefly was OK. I suppose there are some dishes that are better than what I had, but I doubt I’d ever go back unless someone else was treating me again.

The check came out in a glowy lantern which was pretty creative. Like a firefly? Yea. 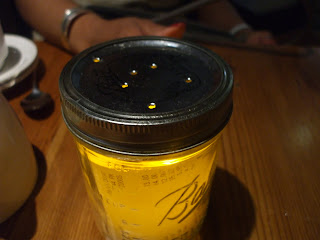 The last place on my list is Farmers and Fishers located in Georgetown. 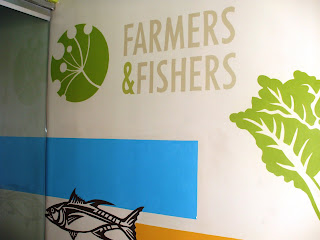 I LOVED THIS PLACE.

The food is SUPER fresh. You can taste it.

I ordered an Angus burger with havarti dill cheese, lettuce, tomato, red onions, pickles, and a special sauce. My meal also came with some of the best tasting fries I’ve had in a long time. They were so yummy and crispy and tasty and non-oily. It was a perfect choice.

Look at all that cheese! 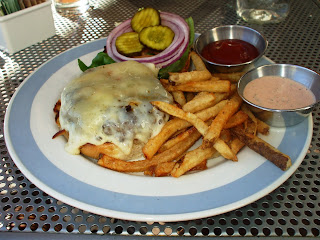 My brother got the baja fish tacos, and they were just as good. The homemade tortillas that they came in were delish. 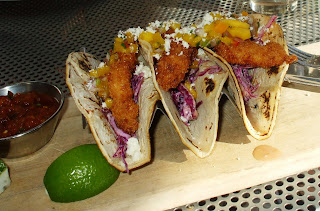 I found out that on Sundays they offer this amazing All-You-Can-Eat brunch for only $25! I can't wait to drag my friends  here for brunch. Check out the brunch menu.

So, those are the eats for this week. Check them out if you’re ever in the area. 

Sidenote: It was really hot while walking around Georgetown which made my brother want to stop for some ice-cream. I love ice-cream so I immediately began looking around for a local shop.

You know the ones I'm talking about. The kind where there’s a cute little man behind the counter telling you about how long and hard he worked on the unique flavors? Flavors that probably include Belgian mint chocolate chip, amaretto almond, peanut butter fudge ripple. mmmm!

Yea. My brother had other ideas.

He made us stop at the first shop we saw. A CHAIN. Hershey’s Ice Cream. UGH. So ordinary and regular. I got a chocolate soft serve with chocolate sprinkles. 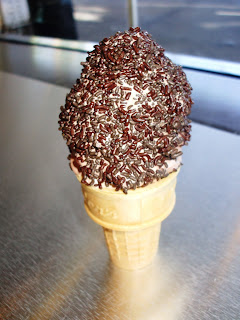 How boring.
Posted by Jihane @ Sinful Sundays at 5:37 PM No comments: Links to this post

Jihane @ Sinful Sundays
Hi! I'm Jihane! I'm a 27 year-old Boston born, Miami raised, New York City educated, and Washington, DC living girl with a huge interest in food. All kinds! This blog is all about the sinful indulgences I cook and eat while living my life here in Washington, DC. Hope you enjoy it, and leave a comment if the content moves you to do so!